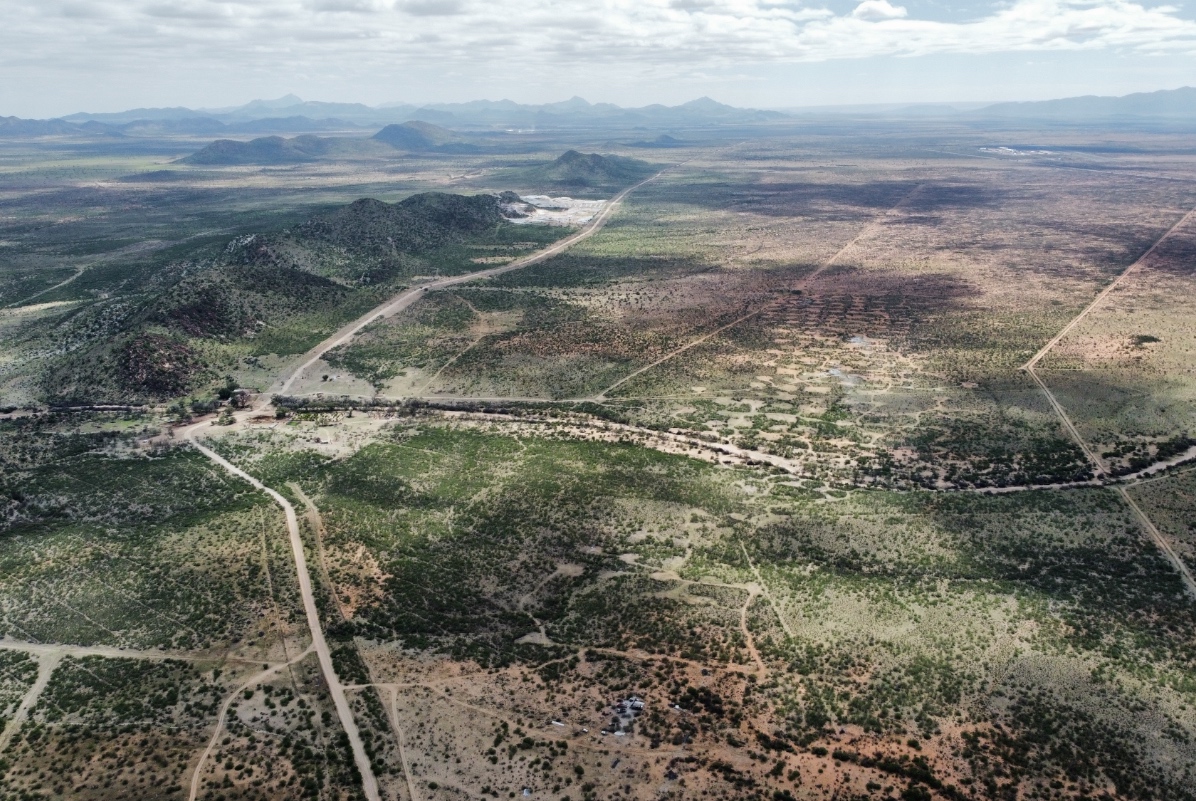 The Twin Hills Discovery lies within the Kuiseb Formation, a sequence of turbiditic marine sediments several kilometres thick, which was folded during the neo-Proterozoic Damaran orogen between 520 and 500 Ma. The gold mineralization is hosted within a meta-greywacke unit, which has been tightly folded into an overturned syncline, underlain by biotite schist and cordierite schist.

The discovery and growth of Osino’s flagship Twin Hills gold deposit in 2019 is a telling story of hard work, perseverance and not following accepted dogmas regarding prescriptive geological models. It demonstrates the use of innovative sampling techniques to enhance the identification of targets for follow-up drilling.

Between 2016 and 2017 David Underwood and Jon Andrew, Osino’ founding pair of exploration geologists, undertook a review of Osino’s exploration strategy which resulted in shifting Osino’s focus away from the known small prospects to potentially much larger, deposit-scale prospects by exploration targeting using fundamentals of orogenic gold deposits.

This review entailed a re-interpretation of the regional structural framework and identification of prospective structures and potential traps under cover, initially using the public domain, high-quality government magnetic dataset. This resulted in the identification of the regional-scale Karibib Fault Zone and an early recognition of its large-scale mineralising system potential and the vectors that ultimately lead to the discovery of the Twin Hills gold system through thick cover.

During 2018 and 2019 a large-scale regional soil and calcrete sampling program was completed, which outlined several gold-in-soil anomalies along the Karibib Fault Zone and surrounding areas. This was followed up with various rounds of scout drilling using reverse circulation (RC) and diamond drilling (DD) which confirmed the presence of anomalous gold within a large-scale hydrothermal alteration system, with gold grades increasing down dip and towards the southwest, where the outcrop is covered by calcrete.

The maiden drill program consisted of 7 diamond drill holes located along 3 fence lines about 400m apart with 100m hole spacing. The program was designed to test bedrock gold anomalies covered by a thick layer of calcrete which were coincident with a large magnetic and soil & calcrete anomaly which had been delineated earlier in 2019.

This initial drill program was a resounding success with 5 of the 7 holes intersecting significant mineralization open in all directions.

Two holes ended in mineralization and were subsequently deepened. Initial logging and structural interpretation indicated that the higher-grade mineralization which was intersected is focussed on the southern margin of Twin Hills surrounded by a lower grade envelope over 100m wide in places.  The seven diamond holes (for a total of 1,475m) were drilled to a depth of approximately 200m each at an inclination of 60 degrees towards south-southeast.

Given these highly encouraging initial results, a second Phase 2 reverse circulation (RC) and diamond (DD) drill programme was initiated. The objective of this phase was to further define the THC discovery, to drill test the other newly defined gold prospects and to hopefully make additional significant gold discoveries within the Twin Hills cluster.

Approximately 5,500m of in-fill and step-out drilling was aimed at expanding the mineralized horizon along strike and down dip. This drilling consisted of 26 diamond & RC holes along 7 fence lines spaced 200m apart with 100m borehole spacing.

The results of this drilling outlined a wide zone of gold mineralization as well as plunging high-grade shoots on the southern side of the greywacke package at Twin Hills Central.

After two phases of drilling, 26 of 33 holes intersected significant gold mineralization including very wide zones of consistent lower grade mineralization and various high-grade shoots. This drilling tested a strike length of 2000m at Twin Hills Central and the drill program ended in December 2019.

The mineralized zone appears to have been faulted and displaced by a series of northeast striking structures as indicated on Figure 2. The gold mineralization is associated with shears and parasitic folds in a meta-greywacke unit, which has been tightly to isoclinally folded at the southern margin of the Karibib Basin.

After concluding two significant financings during 2020, Osino was able to commence a large-scale drill program using 9 RC and diamond drill rigs, focussing on resource definition at Twin Hills Central and new discovery through step-outs at the brownfields exploration targets along strike to the east and west of THC.

A total of just over 51,000m of drilling was completed as part of this program, which resulted in a substantial increase in the size and definition of the Twin Hills discovery. The drill program was highly successful in proving the size and consistency of the ore body with the THC bulge mineralization extending to more than 350m down dip, and still being open at depth.

It also resulted in the discovery of additional high-grade shoots and new discoveries, most notably the Clouds East discovery, along strike to the East of THC.

Some of the best drill intersections are tabulated below:

Drilling was generally carried out on a grid of 50m x 50m drill spacing, with holes drilled at 60-degree azimuth to the SSE.

In Figure 3 and 4 below, borehole collars have been colour-coded according to a commonly used shorthand method of ranking gold intercepts: multiplying intercept average grade (g/t) by width (meters) resulting in a “g/t x meter” intercept measure (combining both average gold grade and intercept with into a single metric known as “gram-meter” or GM).

The THC intersections are notable for their very wide, consistently mineralized nature with respectable grades even when presented in unconstrained fashion. Presenting the intercepts in a more constrained fashion indicates the higher-grade potential of the project which will be unlocked through selective mining.

With the confidence gained from the successful THC discovery and initial resource drilling, Osino undertook an IP survey which was preceded by determination of mineralogical physical properties and resulted in the delineation of various high-quality, near-pit and brownfields exploration targets.

Clouds East has now produced the highest-grade drill intercepts ever drilled at the Twin Hills project and it is evolving into a shallow, high-grade satellite orebody to THC.

Clouds East contains at least two distinct high-grade shoots which have been traced over a strike length of at least 250m and remain open along strike and at depth.

Drilling at THC and Clouds is ongoing with the aim of expanding and better defining the mineralized envelope, chasing the high-grade shoots and filling in the drill density in order to support NI 43.101 code-compliant resource classification later in 2021.

These targets were developed after Osino completed a detailed IP survey over most of the Twin Hills area, using the THC discovery for IP orientation, which resulted in a number of strong and coincident IP anomalies which are currently being tested.

A brownfields exploration program of initially 25,000m of drilling has commenced, with almost half of all planned holes already completed by the end of March 2021. Assay results are expected in April/May 2021 and immediate follow-up drilling of significant mineralization will be carried out with the objective of making further satellite discoveries within 10km’s of THC.

Thrusts and shears have developed along the axial planar foliation along the southern limb of the syncline. The meta-greywacke is underlain by a thin unit of biotite schists and then by cordierite schists which are unmineralized. The early drilling at Twin Hills West indicates a similar structural and lithological setting.

The presence of magnetic pyrrhotite within the greywacke unit allowed the use of ground magnetics as a targeting tool. However, we now know that the gold mineralization is more closely associated with arsenopyrite than pyrrhotite and future targeting will include favourable structural settings which are non-magnetic.

The objective of the 2021 work program is to expand and fast-track the Twin Hills project through ongoing resource expansion & infill drilling and by making additional discoveries on the brownfields ground within a 10km radius from Twin Hills Central.

This will be achieved through a fully funded   ̴C$17m exploration and development budget encompassing the following key aspects:

In March 2022 Osino completed an updated resource which was published
on the 14th of April 2022. You can download the CSV data as well as the
Datamine model in the free version of Leapfrog viewer using the links below.