Capitalising on the discovery of the Twin Hills Central deposit and the wealth of geological information generated, Osino has decided to revisit the entire Karibib gold district with renewed exploration now focused through this knowledge.

The Karibib District Project is held through 14 licences comprising approximately 156,000 ha of prime geology which straddles the heart of the known gold showings between the towns of Usakos, Karibib and Omaruru.

This gold bearing district hosts the multi-million ounce Navachab Gold Mine, Osino’s recently discovered Twin Hills deposit, and a number of known minor deposits such as the Onguati copper-gold and the Goldkuppe gold showings. Much of the area has never been systemically explored as it is covered by calcrete and wind-blown sand.

These sediments are suspected to be the probable source of the gold mineralisation, and importantly, most of the known deposits, prospects and geochemical anomalies are associated with the southern and northern margins of this basin.

Significantly, in parallel with other orogenic gold hosted systems, the understanding of this interplay between large structures and thick basin morphology has been the key to discovering gold deposits in these terranes. Early work by Osino identified a large, regional structure – the Karibib Fault – which lies along and forms the southern faulted margin of the Karibib Basin filled with a sequence of turbiditic sediments several kilometres thick.

The Karibib District Project is situated within the Southern Central Zone of the Neoproterozoic Damara Supergroup, largely comprised of marbles and siltstones, which grade northwards into turbidite clastic sequences representing a continental shelf and basin margin at the time of deposition.

A major orogenic event between 550Ma and 500Ma closed the basin along a series of major ENE structures. Hydrothermal fluid movement was focused along these structures and produced widespread gold mineralization within the marbles and schists.

After the discovery of the Navachab Gold Mine in 1986 by Anglo American, regional exploration including stream sampling, soil sampling and limited drilling of known gold occurrences in the marbles of the Karibib Formation at Goldkuppe, Albrechtshöhe and Dobbelsberg was completed.

In 2013 further diamond drilling at Goldkuppe and Albrechtshöhe was carried out by Helio Resources, but subsequently no additional work was done over these targets until 2017 when Osino started work in the area with particular focus on the more fertile southern faulted margin of the basin and the Karibib Fault.

The eastern portion of this fault trend (which stretches over 20 km in length) was soil sampled and a number of significant gold in soil anomalies, including Twin Hills, OJW and Okapawe, were discovered. The mineralization occurs in association with fault splay, jogs and bends, and is strongly structurally controlled – features all typical of fertile orogenic gold belts.

The entire extent from Twin Hills East to the Navachab Gold Mine property was then covered by a detailed 50 m line spaced magnetic ground survey. This data provided lithological and structural detail in an area that is completely covered by calcrete and sand.

The detailed ground magnetic data was of particular value in defining prospective structures and enabled support of the geochemical data collected at surface, therefore critical in helping constrain the generally covered geology in the Twin Hills area.

A short scout drill program of RC and DD drilling was undertaken during April and May of 2018 with 23 holes completed at the Twin Hills East prospect, and a further 6 at Okapawe. The drill results at Twin Hills East confirmed the presence of gold within a large-scale system hosted along splays from the Karibib Fault. This mineralization was outlined at surface for over 3 km of strike before disappearing beneath calcrete cover to the south west.

In the second half of 2018, exploration became focussed on the south western, calcrete covered strike length of the fault with the work program including calcrete sampling, detailed ground magnetics and RAB drilling to test the bedrock under the cover.

It is now clear that the gold discovered is contained within a meta-turbidite package including interbedded biotite schists, muscovite schists, siltstones and fine grained sandstones. Mineralization is associated with pyrrhotite, arsenopyrite and minor vein quartz while potassic alteration is present in the wall rock adjacent to the mineralization and higher grade zones are often associated with silicification.

Using these guidelines, a review of past known showings showed it would be important to revisit many of the already identified soil anomalies with these features in mind.

Osino started work on Goldkuppe towards the end of 2016. When the project was first acquired from Helio Resources a planned drill programme was in place. The central portion of the target was to be drilled with a view to assembling an initial resource.

After 25 holes, Osino curtailed the drill programme as it was apparent that the historical understanding of the mineralization and structure was poor, and that further work was required before an effective resource drill-out could take place.

This formed the framework for an updated drill programme which resulted in extending the known Goldkuppe mineralization by 2.5 km to the southwest, adding scale and proving that the gold mineralization extends into the banded marble, which forms the footwall to the mineralised dolomitic marble.

In January 2019 an updated structural interpretation of the ground and airborne magnetic data as well as satellite imagery was carried out. Areas of better mineralization are now seen to be associated with north-south or north-north-east faults, which appear to be acting as pathways for hydrothermal fluids.

The most prominent of the north-south structures forms the Goldkuppe hill, characterized by intense iron and silica alteration, and which has seen very little drilling in the past programs.

Given the success of the Twin Hills discovery, combined with the huge increases in knowledge of the style of gold mineralisation now discovered in the district, an expanded work programme has been planned on the Karibib District Project in 2021. A number of targets are being prioritised for exploration, while further regional soil sampling on a wide spacing along the Karibib Fault at Klein Okkies and Kranzberg West, as well as the calcrete covered area at the Dobbelsberg dome is planned for later in the year and results are highly anticipated.

Given the new understanding and the appreciation of the importance of the Karibib Fault and related structures as hosts and conduits for gold mineralisation in the area, and with the demonstrated success delivered at Twin Hills Central, the Company forsees an exciting year for this renewed program of exploration within the district. 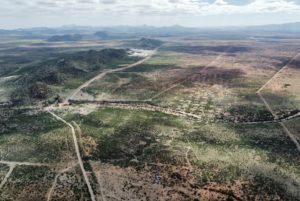 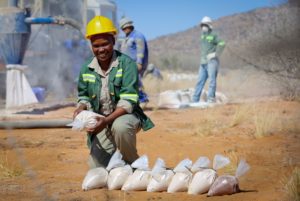 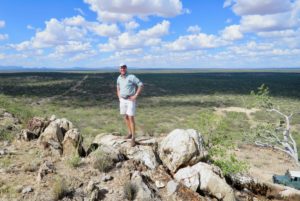